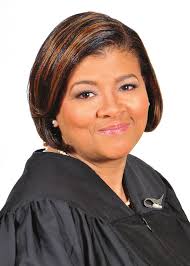 Appointed in December, 1998 by Governor Tom Ridge, unanimously confirmed by the Pennsylvania Senate, and elected to a second ten year term in November, 2010, the Honorable Sheila Woods-Skipper currently sits on the Court of Common Pleas, First Judicial District, Orphans’ Court Division, where she brings honesty, commitment and fairness to the bench. On November 4, 2013, Judge Woods-Skipper was unanimously elected by her colleagues to serve a 5 year term as President Judge of the Court of Common Pleas. As President Judge, Judge Woods-Skipper focused on promoting access to justice, inclusiveness and efficiency. She has an open door policy that allows open communication and problem solving. On January 27, 2016, Judge Woods-Skipper was appointed by the Pennsylvania Supreme Court as Chair of the Administrative Governing Board of the First Judicial District, and served until her term as President Judge ended in November 2018. From November 2008, until her election as President Judge, Judge Woods-Skipper served as Supervising Judge of the Criminal Trial Division where her assistance was instrumental in implementing the zoning of court cases and the creation of innovative programs in the Criminal Division that have fostered public safety, reduced prison population and increased efficiency in the processing of criminal cases. One of her many significant accomplishments is the creation of the First Judicial District Mental Health Court over which she presided until her reassignment to Orphans’ Court. Mental Health Court began as a small pilot program in 2009, and now serves hundreds of offenders, providing substantial assistance and oversight to facilitate their re-integration into society as productive citizens. Judge Woods-Skipper was previously assigned to the Homicide Program and served as the coordinating judge for the Waiver Program. She served as a member of the Judicial Education Committee, providing guidance and support to the newly elected judges and those transferred from other assignments. In 2014, Judge Woods-Skipper was appointed by the Supreme Court to the Advisory Council on Elder Justice where she chairs the Elder Abuse and Neglect Committee. In response to a recommendation of the Elder Task Force of the Supreme Court, Judge Woods-Skipper opened an Elder Justice Resource Center in October, 2016, to provide direct services to seniors, and education to the public regarding issues impacting seniors in the justice system. She is also a member of the Philadelphia VIP Board of Directors, where she serves on the Board Development Committee and previously served on the Executive Director Search Committee. She is a member of the Executive Board of Temple Law Alumni Association, where she serves as Chair of the
Service Committee and on the Women’s Initiative Committee. She is an adjunct professor at Temple University School of Law and served on the Philadelphia Bar Association Commission on Judicial Election & Retention and formerly as a Board of Director of the Lawyer’s Club. Appointed by Governor Rendell in 2008, she served as a member of the State Interstate Compact for Adult Offenders until 2012. In 2006, she was appointed by the late Justice Cappy to the Pennsylvania Commission on Sentencing, and now serves as Chair, having been re-appointed by Justice Castille and Justice Saylor for several additional terms. She was also selected to serve on the Mental Health Advisory Commission (MHAC) of the Pennsylvania Commission on Crime & Delinquency (PCCD).

Judge Woods-Skipper has participated in numerous professional activities including the Pennsylvania Conference of State Trial Judges, where she serves as Zone Representative and Co-Chair of Problem Solving Court Committee, Pennsylvania Bar Association House of Delegates, American Judges Association (Former Board of Governors), National Association of Women Judges, (Former District 3 Director) Past Chair, Clifford Scott Green Chapter, National Bar Association Judicial Council, Philadelphia Bar Association, National Bar Association Women Lawyers Division, Barristers Association, the Criminal Inn of Courts, and Temple University American Inn of Court. She serves on the Board of Directors of the Forum of Executive Women, (CoChair Forum Ally partnership with Girls Inc., member Diversity and Inclusion Committee). She has participated as a panelist for professional organizations such as the American Bar Association, Philadelphia Bar Association, Meet the Judges Forums, PA Bar Association and the Pennsylvania Bar Institute. She has organized and participated in forums about the court and criminal justice process, and served as a mentor to high school, college and law school students. She has received numerous awards and recognitions including the Justice Juanita Kidd Stout Women of Distinction Trailblazers Award, the Justice William J. Brennan, Jr. Distinguished Jurist Award, Leon Higginbotham Award, and Women’s Champion Award.
Judge Sheila Woods-Skipper is a native Philadelphian who attended Philadelphia High School for Girls, the University of Pennsylvania, and Temple University School of Law. Judge Woods-Skipper was a Judicial Law Clerk to the late Honorable Charles Wright, Court of Common Pleas and served as an Assistant District Attorney for Philadelphia County for 11 years.

She is married and the proud mother of three sons, and grandmother of three. Judge Woods-Skipper supports her community and church by active membership in the Enon Tabernacle Baptist Church, THE LINKS, Penn Towne Chapter, and Alpha Kappa Alpha Sorority, Omega Mu Omega Chapter. She participates as a mentor in Girl’s Inc., Rising Stars Leadership Mentoring Program through Temple Law Alumni Association and the Girls Inc. Ambassador Leadership Mentor Program through The Forum of Executive Women. Judge Woods-Skipper served as the Former President, and on the Board of Directors of The Ivy Legacy Foundation, former Third Vice-President and Parliamentarian of the National Coalition of 100 Black Women, Inc., Pennsylvania Chapter, former participant in Advancing Civics Education [ACE] Program, Girls, Inc. Discovery Leadership Mentoring Program, and the Ivy AKAdemy Teen Mentoring Program.